Pledge for the Planet 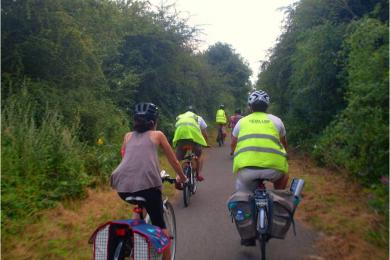 Climate change is the biggest threat humanity faces. Many of the world’s poorest and most vulnerable people are already feeling its effects today. It’s time to make a pledge and act.

Tackling climate change is not just about saving trees and polar bears, somewhere far away and in the future; it is a justice issue.

It is not about saving the planet either; the earth has experienced changes in climate much greater than it is currently experiencing. However, the amount of climate-changing greenhouse gas emissions we are currently releasing into the atmosphere is shifting the climate into a state that we as a species, and most other life on earth, have never experienced before, away from the climate we all evolved in and are perfectly adapted for. We are also causing the climate to change at a rate that is too fast for most species to adapt to, and creating serious human migration pressure. So whilst we are not saving the planet by tackling climate change, we are certainly saving life as we know it!

The picture can look bleak; however, all is not lost! Any cuts we make to emissions will make the future impacts smaller. We still have time to make a difference, and bring global greenhouse gas emissions down to a level that would mean we avoid the kind of climate change that would make the world look significantly different from how it looks today. We can achieve this with a combination of individual, business and political action.

So what can we do, right now?

We have big opportunities in 2015 with the UK general election and the international climate negotiations taking place in Paris in December. If we show our election candidates and new MPs that we want serious action on climate change, the UK could take a strong stance in the negotiations in Paris. But let’s not just leave it to the politicians; let’s all commit to taking action ourselves, and let them know about it to set them an example!

Fill out the pledge card in the Pledge for the Planet Pray & Post card, stating what action you pledge to take this year to cut your own greenhouse gas emissions, and ask your representative what action they will take, then send it back to the SPEAK office. If you need more copies of the Pray & Post, get in touch. Then use the Prayer and Action points to make it LOUDER!

Why should Christians care about climate change?

In the parable of the good Samaritan, Jesus tells a story of a man left for dead by violent muggers, who is passed by by people so focussed on religious concerns that they miss human need, before finally being helped selflessly by a foreigner. His point? Go and do the same. Be that good neighbour. Love beyond boundaries. We cannot claim to love our global neighbours if at the same time we do not care that the homes, health and livelihoods of so many are threatened by climate change.

The Bible also tells us that we are made in God’s image – with unique potential for creation, destruction and moral choice. God intends us to care for the earth, as well as making it productive for our own good. How we act reflects God’s image to the rest of creation – we can be good news for the world that God has made, by ruling over it with self-sacrificial love, the way Christ rules over us. More on the Bible and climate change here.