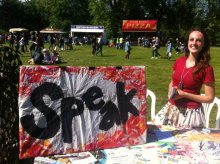 A how-to guide to one of the most effective ways to make more of a noise about injustice!

Added your love to the ‘For the love of...’ petition yet? Yes? Good! Now let’s take this waaay beyond ourselves! Street stalls are one of the best ways to increase the amount of people we reach with our campaigns, and the voices we capture speaking up for justice. It’s also a great way to raise our profile and build up our local networks.

The ‘For the love of...’ climate campaign in particular is about making the voices of as many people as possible heard speaking up against climate change – politicians already know that activists care about polar bears blah blah blah; what they perhaps need to hear is that the ordinary person in the street is worried their local football pitch will become unusable in future winters due to increased flooding, or that pizza will become a rare treat if global wheat and tomato harvests fail, or that their relatives in Bangladesh risk losing their homes in the near future...so let’s think how we can best capture those voices!

Practical – what you need:

Getting permission: councils vary – most require permission for street fundraisers, but many allow campaigning. Speak to other local groups in your town who do street stalls to find out how they got permission, or if you don’t know any, ask your council directly. Universities – again it varies – ask your Union, and join up with another group that already has permission if you find you can’t do it yourself, eg. the chaplaincy or a society.

We’d love more pictures sent in as part of our Pray&Post photo petition to make this really visual – but the main thing is to capture people’s voices. So if that doesn’t work for you on your stall, maybe think of another creative way you could get people sharing their ‘loves’? Here’s one example – I got my local FoE group to do the action and we got people to fill a big heart-shaped outline with colourful heart-shaped cards that said people’s ‘loves’ on one side and had the petition form on the back of each to fill out. But be creative!

Finally – take photos! Photos are mega useful for social media, conventional media (write a press release about what you did/are planning! Get in touch with us if you need advice), your own group’s publicity and also Volumize/Network e-news – send them in to SPEAK so we can share your ideas with other groups!
Go get ‘em! :)