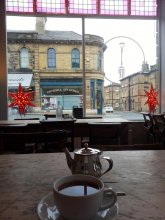 Last week, Chris and Helen from the Network Support Team took the Seeding Change Tour to Saltaire, Bradford. Helen shares more about what turned out to be an inspiring day all round.

The sign that greeted me as I arrived on the train said ‘Welcome to Saltaire, a World Heritage Site’. Leaving the station I passed a canal busy with ducks and colourful narrowboats and headed up past a historic yellow stone-built mill into the smart centre of town past quirky art shops, all the buildings made of the same beautiful yellow stone. A very grand location. But radical things are happening here; Saltaire is no museum! We had been invited by local SPEAK folks to bring the Seeding Change Tour to the Saltaire Canteen, part of the amazing Shipley Food Project, to share SPEAK’s vision for a world where food is grown and shared as though people and the earth mattered, and find out what the Shipley Food Project were up to locally.

We kicked off the day by introducing ourselves and sharing a boring fact about ourselves (sharing an interesting fact is so outdated :P ); therefore I admitted that my favourite colour is blue, and Chris revealed that he had had a sandwich for lunch the previous day. Mindblowing.

After everyone had composed themselves after these revelations we shared about SPEAK’s campaign for food sovereignty; how we want to see people given control over where their food comes from, how it is grown, and access to land and markets as needed. We discussed the broad range of issues this touches on, both in the UK (food banks, packaging, ethical eating...) and globally (pesticide use, land grabs, control over seed production and use...), before focussing down onto our current campaign on the New Alliance, spending some time adding our own prayers and signatures to the seeded paper petition, and practising how we could explain the campaign to others and make it grow.

After a delicious lunch provided by the Canteen, Duncan from the cafe told us more about the project. The Canteen is part of the Shipley Food Project, which has three strands – firstly it provides a food bank, on a relational basis to really get to know users, secondly a cook and eat together club where people can meet up to learn to cook together and get to know each other over food, and thirdly a Pay What You Feel cafe – the Saltaire Canteen. The Canteen makes all its food from waste food, food that would otherwise have been binned. It is run on a pay what you feel basis, with the aim of making it accessible to all with no-one excluded, and the profits it makes are used to fund other parts of the Shipley Food Project. Tackling the problem of food waste is a major aim. Each year we waste 30% of all the food we produce, which largely ends up in landfill and represents a huge amount of land, energy and water going to waste. It’s enough to fill Wembley stadium to the top 6 times over! Inspired by the leftovers Jesus’ followers collected up after He fed the 5000, the cafe believes there is genuinely enough food out there for everyone if we use it wisely. The cafe gets its food from gleaning unsalable or leftover produce from farms, taking unsold goods from wholesalers (a valuable service to the wholesalers apparently, as they would otherwise have to pay to bin it!), and misshapen vegetables. They also aim to raise people’s awareness of food waste as a problem, and how they can reduce it themselves by shopping sensibly and being more confident about using common sense over food labelling. Why bin something just because it has reached its BBE date, when if we had bought the same product fresh from a greengrocer or butcher it wouldn’t have a date on it – we’d use our eyes and nose to judge if it was still ok! They also host skill sharing classes to pass on vital skills such as preserving fruit and vegetables and bread making. Finally, the Canteen is about far more than just food as a resource – it is about community. The tables are long, communal tables so people can mix and talk to one another, the staff hang out and talk to customers, and some people’s role is simply to be a listener – to be there for people and listen to what they have to say. All in all a truly inspiring project that gets to the heart of what it could mean for us to seed change in the food system locally.

Finally we discussed together what food-related issues we could see in the area, how we could be involved in tackling them, and how it all relates to global issues of food sovereignty. We closed with an encouragement to everyone to give the Seeding Change campaign’s seeded paper petition one last big push this summer before its hand-in at the Peace Festival, to come to the Festival to see the prayers planted into a prayer garden, and everyone went away with seeded paper, blank petition sheets and a challenge to take the campaign back to their churches, youth groups and other campaign groups to get as many signatures and prayers as possible!

If you want to find out more on how to grow your own campaign – Seeding Change or otherwise – here’s a great little resource!
Download blank petition sheets here
Contact us if you’d like some seeded paper to collect prayers on and/or someone to come and speak about SPEAK where you are!