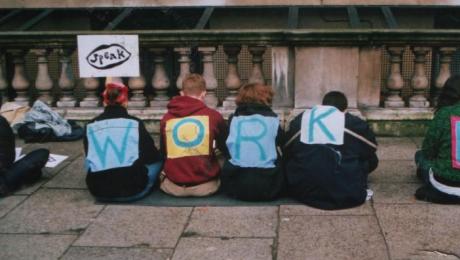 We hope this page will answer some questions you may have about our Unfinished Business Campaign.

Buying Fairtrade bananas is a great start and by taking that small action you are part of a global movement of people fighting to protect workers rights. However, not all companies sign up to Fairtrade or have such ethical practices. So we need a Commission for Business, Human Rights and the Environment so when UK companies are responsible for human rights abuses or environmental destruction, victims can get access to justice.

What’s happened so far in SPEAK’s campaign for corporate accountability?

SPEAK members took a creative built the biggest Dress in the world, made out of people’s petitions for justice in the clothes industry. The Big Dress can still be seen today at various festivals in the summer (as well as a petition it’s also a very handy large tent!) Alongside others in the CORE (Corporate Responsibility) Coalition, SPEAK campaigners affected the biggest shake-up of company law in 150 years, with the 2006 Companies Act. It strengthened requirements for companies to report on social and environmental issues, and introduced for the first time a duty for directors of companies to consider these issues when making decisions. But it didn’t go nearly far enough, and access to justice for victims of corporate abuse was left completely untouched.

Simply because the 2006 Companies Act made some changes but left huge amounts of work ( “Business”) still to be done (or “Unfinished”!) to ensure UK business acting abroad improve their environmental and social performance. So SPEAK campaigners decided to carry on focussing on this issue with the Unfinished Business MP3 Petition.

What’s in it for poorer countries?

Why’s it our job if another country’s legal system doesn’t work?

The book of Proverbs in the Bible asks us to ‘SPEAK out for those who cannot SPEAK for themselves’. Some poorer countries simply don’t have enough trained lawyers, money or power to create strong legal systems. What’s more, poorer governments can be bullied out of introducing stronger human rights or environmental protection, by companies threatening to take their business elsewhere. We should always do what we can to protect the poorest and most vulnerable from injustice, so that means supporting providing access to legal justice in whatever way we can.

Isn’t it a bit colonialist to go meddling in other countries’ affairs?

We live in an increasingly interconnected world and countries need to work together to create a more peaceful and sustainable future for everyone. By creating a Commission to deal with these issues we are providing a way for victims and poor countries to stand up and demand their rights.

How would the Commission work?

The functions of the Commission could include: