Your mission, should you choose to accept it...part 1 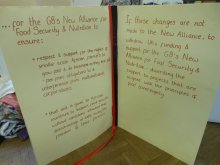 Here's your challenge - to get yourself so familiar with SPEAK's 3 main current campaigns that you can explain them to others and make 'em LOUDER!!

SPEAK's campaigns come from you, the Network, and depend on you to make them grow and make a real difference to injustice! And that means we need to understand them inside out so we can spread the word and get others involved - what they're about, what we're for and against, what we're asking to who, and what we've done so far and what's next!

Background - What it is:

A campaign for food sovereignty – where food is grown and shared as though people and planet mattered; where people have control over where their food comes from, how it is grown, and access to land and markets as needed. More background here

What the current main campaign is asking:

The UK government’s Department for International Development is funding something called the New Alliance for Food Security and Nutrition in Africa – which could be a great thing, but at present all negotiations that will determine the future of African farming are taking place between the G8 richest countries in the world, with the involvement of big agribusinesses like Monsanto and food companies like Coca Cola! Understandably, many African civil society and farmers’ groups have come together to ask whether they’ll get *their* say in the negotiations; after all, it’s their land, food, livelihoods and future at stake!

So we are asking: That DfID makes sure African farmers’ and communities’ voices are heard in negotiations; That UK aid money is used for development, rather than being used indirectly to fund big agribusiness; That if these conditions are not met, that DfID pulls UK support out of the New Alliance. (see photo above for the full asks!)

What we’ve done so far

We've written to DfID to ask them to investigate land grabs tha were indirectly funded by UK aid money, and got a weak response; written to Brazilian minister to call for pesticides that are banned in the EU but allowed in Brazil to be banned there too, since they are harming the health of farmers and local people - we did this via a Pray & Post card in solidarity with Brazilian sister network Fale; written to DfID about the New Alliance – and got another weak response.

Currently we are asking DfID the demands above via a petition and prayer action, the seeded paper petition; this involves collecting signatures from anyone who agrees with these demands on a conventional petition, but also collecting prayers for the campaign written on bits of seeded paper, paper made with wildflower seeds inside! We'll hand in the petition to DfID and plant the prayers in the ground so the flowers that come up represent our prayers.

More! We need to up the pressure on DfID. Get more seeded paper petitions done, more letters written about the New Alliance and land grabs. We want more Fale Pray & Posts done, take it wider than just ourselves and get others signing outside of SPEAK. Seeding Change Tour – host one and promote it locally, perhaps with other groups or societies in your area to raise awareness and effectiveness of the campaign.

To first practise explaining the current campaign to others, then go out and get more seeded paper petitions, letters and Pray & Posts done!

If you need seeded paper, petition sheets, Fale Pray & Posts or want to host the Seeding Change Tour, get in touch with the office

And find out about campaign 3, 'For the love of...', on climate change