For the love of... UK holidays 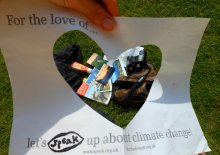 For the love of holidays in the UK, let's stop climate change. Here's why:

I don’t think I’ll ever manage to get out of this country for a holiday abroad – because I love this country so much!

We have so many fabby places to visit here that the more places I travel to in the UK, the more my UK want-to-visit list grows – I find I want to go back to my new favourite holiday location after visiting it, as well as wanting to see other parts of the country as I find out about them! There are some places that are incredibly special to me, and I can’t stand the thought that they may be changed beyond repair by climate change.

I love the Southwest Coast Path, and am so excited to live so close to a stretch of it; the south west coast is really varied and takes in tall cliffs, deep, lush valleys, little fishing villages, major cities, surf beaches, wildlife havens, and top fossil-hunting spots where the rocks date back to the age of dinosaurs. But this winter coast was so badly hit by exceptional storms, which are thought to have been worsened by climate change, that many parts of the path were closed due to flooding and increased erosion, and Coast Path lovers like me were unable to enjoy it. It’s summer now and parts of the path are still closed, so we still can’t go walking there. To make matters worse, the extreme weather killed thousands of seabirds, which washed up dead along the coasts around the south west, and I definitely don’t want that to get worse.

I love islands, especially those with big seabird colonies like Scomer in Pembrokeshire, the Hebrides in western Scotland and the Farne Islands in Northumberland. But we’re already losing seabirds in huge numbers due to climate change, from the winter storms I already mentioned and also because birds in their thousands are failing to raise young due to not being able to find enough fish to feed them, which in turn is being caused by climate change reducing their numbers and forcing them to move away in search of food from the parts of the sea they used to live in and where birds knew where to find them. It’s a real possibility that we could totally lose our seabird colonies – what a disaster for these amazing places!

The Lake District is just brilliant for walkers like me, and has such a beautiful landscape, so it worries me that it could suffer from extreme weather like more droughts and flooding, which would mean summers that are less lush and green, increased erosion of the beautiful hills, tree deaths and times when it is hard-hit by flooding.

The Cairngorms in the Scottish Highlands are an amazingly wild place, special for skiers and also for their unique wildlife, like the ptarmigan grouse, which I was so excited to see for the first time there last spring. But the mountain environment is already being pushed towards the edge, with less snow in winter for the skiing industry and mountain wildlife being pushed further and further up the slopes along with its preferred climate zone. Soon there may be nowhere for it to go and we might lose really special species like ptarmigan altogether from the UK.

North Norfolk is really close to my heart as I used to live in Norfolk, I love how wild that coast is, especially in winter when the skies fill with wild geese. But it too is seriously threatened, as it is a low lying and fast eroding coast. The precious salt marshes that those wild geese visit us for will likely be lost to sea level rise, and the impressive sand dune ecosystems will be eroded by storms. And there are so many other amazing places in this country I would be heartbroken to lose.


We have time to save these precious places, so let’s keep pushing to protect our amazing country from climate change.