For the love of...my friends' futures 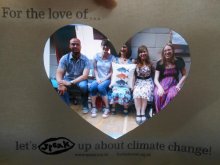 For the love of my friends' future plans, let's do something about climate change. Here's why:

Every generation has grown up with dreams that they have had increasing chances of fulfilling – until ours. Already burdened by debts, struggling with low rates of graduate employment and stuck in the rent trap, our life plans are also very likely to be impacted by climate change as it begins to bite seriously over the next few decades.

By the time we’re old in the middle of the century, heatwaves like those that killed thousands of elderly people across Europe in 2003 are predicted to be the norm here, though individual summers could be warmer or cooler than that – climate change could directly cut short our lives. That’s without even considering the impacts on the families we dream of having one day, and the sort of society we could be living in in the UK by the time we are old.

If we manage to retire, the UK may no longer be a ‘green and pleasant land’ as flooding, drought, species losses and crop diseases take their toll on the countryside, our economy could have broken down if we persist in basing it on unsustainable foundations, and we could be facing serious unrest, war and terrorism as migration increases from areas of the world that are becoming harder to make a living in due to climate change, and xenophobia increases in countries like ours that won’t be so hard hit.

Not the future I dream of – I don’t know about you!