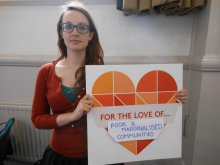 The next 2 years are going to be really key in the fight against climate change.

It’s all been a bit quiet on the climate change front since the Copenhagen negotiations back in 2009, where the international community basically agreed to agree a deal, but failed to come up with anything stronger. However, over the next couple of years we have loads of opportunities to influence UK and international climate policy. Here’s how it’s looking:

World leaders have agreed to agree(!) an international climate deal in Paris in December 2015. This is unlikely to be strong enough to solve the problem in itself, but we’re expecting an agreement that will at least involve all major players, which will be an important step in the right direction! So we have lots of work to do to persuade our leaders that we want the strongest possible deal to come out of Paris in 2015, and then to keep working to build on whatever it is they agree to afterwards.
The EU is really important to this process – it’s had a history of making relatively strong commitments on climate change, and is a powerful block of countries when it acts together, so it has the potential to pull the rest of the world in the right direction. The EU is already working on putting together the commitment that it will offer in the negotiations in 2015. The UK has actually been playing a leading role in pushing for a strong EU role in international climate negotiations – and this means that we as UK voters are really important to making the call for a strong climate target louder! Our politicians really need to hear that the UK people really want strong action on climate change – those, such as Ed Davy, who are taking a lead, need to hear that the public are behind them. With obvious public support, the rest of the government will be able to get behind the fight against climate change. Sounds unlikely? Interestingly, both media and government ministers have begun talking more about the dangers of climate change and the need for action recently, with the Daily Mail and Telegraph stating it’s a real problem that needs action, and Cameron, Osborne and Gove all highlighting climate change as a real threat! So maybe the tide is turning... Let’s show them it’s important to us too, and raise it up their agenda!

All year – SPEAK will be doing a photo petition to show our politicians what we care about that we’re worried is threatened by climate change. Get taking paper heart pictures and listening to people’s stories of why climate change matters to them personally – in your SPEAK group and beyond... more details here!

EU election, May – We need MEPs who will take a lead on strong climate action. However, the people most keen on voting in the EU elections are eurosceptics rather than people who care about other issues, and they tend to get disproportionately represented as a result – so get out and vote!

EU Summit, June – The EU will be discussing energy security and possibly EU2030 emissions targets. A good time to remind them to tackle inefficiency and energy waste.

Climate Summit, September – Ban Ki Moon has called a world leaders’ summit aimed at getting world leaders to agree on the need for strong climate targets ahead of the international climate negotiations in Lima this year and Paris next year, which will give their negotiators a mandate for making strong commitments on their behalf at the negotiations.

Lima, December –  World governments aim to make a draft of the agreement they’ll be signing in Paris next year at this meeting. We need to make sure they know their public care and want ambitious targets.

UK elections, May 2015 –  Let’s make climate change a major election issue! From the New year, SPEAK will have a new campaign targeting election candidates and newly elected MPs to make sure they know climate change is a big deal to voters and that we want a government that will take a lead in cutting carbon emissions and in climate negotiations.

Paris, December 2015 –  Where a new global agreement on climate change should be made.

Beyond... The Paris agreement will not be the end of the story, whatever the outcome! We need to keep letting our politicians and businesses know that we need to do all we can to cut emissions and protect the things we love.